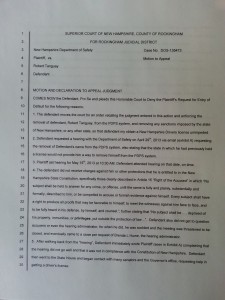 privileges. Here is the official version as a pdf file : DMV PDPS Appeal

Bellow is an internet friendly text version of the PDPS (Problem Driver Pointer System) for you to read or use in appealing negative decisions against your drivers license. Please share this and other content on this site, along with helping anyway you can.

MOTION AND DECLARATION TO APPEAL JUDGMENT

COMES NOW the Defendant, Pro Se and pleads this Honorable Court to Deny the Plaintiff’s Request for Entry of Default for the following reasons:

1. The defendant moves the court for an order vacating the judgment entered in this action and enforcing the removal of defendant, Robert Tanguay, from the PDPS system, and removing any sanctions imposed by the state of New Hampshire, or any other state, so that defendant my obtain a New Hampshire Drivers license unimpeded.

2. Defendant requested a hearing with the Department of Safety on April 29th, 2013 via email (exhibit A) requesting the removal of Defendant’s name from the PDPS system, also stating that the state in which he had previously held a license would not provide him a way to remove himself from the PDPS system.

4. The defendant did not receive charges against him or other protections that he is entitled to in the New Hampshire State Constitution, specifically those clearly described in Article 15 “Right of the Accused” in which “No subject shall be held to answer for any crime, or offense, until the same is fully and plainly, substantially and formally, described to him; or be compelled to accuse or furnish evidence against himself. Every subject shall have a right to produce all proofs that may be favorable to himself; to meet the witnesses against him face to face, and  to be fully heard in his defense, by himself, and counsel.”; further stating that “No subject shall be …. deprived of his property, immunities, or privileges, put outside the protection of law…”.  Defendant also did not get to question accusers or even the hearing administrator, for when he did, he was scolded and the meeting was threatened to be closed, and eventually came to a close per request of Brenda L Hume, the hearing administrator.

5.  After walking back from the “hearing”, Defendant immediately wrote Plaintiff (seen in Exhibit A) complaining that the hearing did not go well and that it was not in compliance with the Constitution of New Hampshire.  Defendant then went to the State House and began contact with many senators and the Governor’s office, requesting help in getting a driver’s license.

6. On or about May 16th, Defendant’s representative, Senator Carson, contacted the head of Department of Safety, Commissioner Sweeney, in hopes of obtaining exactly why defendant was on the PDPS and what he would have to do to obtain a license, and was informed by Sweeney that he would attempt to furnish these details.

7. Plaintiff made judgment on May 17th and mailed it to defendant (Exhibit B), stating that the “Sentence Remains”. None of the 3 exhibits listed in the decision were provided, including the “DOS Withdrawal History”, which is presumed to have information regarding as to why defendant is on the PDPS. Defendant has never seen this crucial exhibit, even after specifically requesting to do so.

8. On May 20th, Christopher Casko, Administrator of the Department of Safety, wrote Defendant (Exhibit C), weakly defending judgment, also including copy of Exhibit B, also missing ALL of the Plaintiff’s exhibits. Defendant promptly responded, informing Casko that the decision was incomplete and the process was unconstitutional. Casko has yet to respond.

9. As of the date of writing this appeal, Senator Carson has yet to hear from Commissioner Sweeney with details of the reasoning for Robert Tanguay’s inclusion in the PDPS.

10. The New Hampshire Department of Safety has made, in their own words, a “judgment” against the driving privileges of Robert Tanguay (defendant) without adherence to Defendant’s constitutional rights. Plaintiff has stated several times, and proven through it’s failure to respond, that it does not know why defendant is on the PDPS, yet has still made a judgment preventing defendant from getting a drivers license.  New Hampshire is making a decision, aside and separate from any other decisions made in past. This requires full compliance with Due Process and the Rights of the Accused; that they must prove up and review evidence to all those on the PDPS before admonishing any privileges. Failure to do so leaves room for a wide range of errors, from simple clerical to those of corruption and racketeering.

11. The Constitution of New Hampshire was written clearly to protect the God given rights of all those subject to state law. This one document is the work of countless generations of humankind and was set forth, in good faith, to prevent the very tyranny that is proven to arise when one man has power over another’s liberty. It supersedes all laws written after its creation, as it is the foundation of our government and the law of the land.

I, Robert Tanguay, declare as follows:
1. I am the defendant in this appeal. I am not a lawyer and have written this appeal, including the legal pleading paper format, in whole of my own labors since no help was to be found.
2. I request that the judgment entered in this action be vacated for the following reasons:

A) Plaintiff did not prove or substantiate ANY charges, evidence, or explanation at the hearing or with the Report of Hearing Examiner, in which it called on exhibits Plaintiff has purposefully or negligently left out of that report.

C) Defendant is a responsible person and driver, and poses no risk to New Hampshire drivers. The only possible reason for being on the PDPS that Plaintiff has displayed is failure to pay fines. Finances have nothing to do with driving safety, unless related to vehicle maintenance.

D) Defendant has a right to defend himself from attacks and denials to his privileges and rights in a New Hampshire court of law, wishes to exercise those rights, and has made every attempt to do so.

3. A Writ of Mandamus be made to the Department of Safety and Department of Motor Vehicles ordering them to grant Robert Tanguay (Defendant) the privilege of obtaining his New Hampshire Drivers License without levy or sanction by the PDPS

4.  A Writ of Mandamus be made to the Department of Safety and Department of Motor Vehicles halting the use of the PDPS in determining license eligibility until a complete audit in procedure is made and implemented, ensuring that the PDPS is applied in alignment of the state constitution. Defendant should be considered an expert in this matter, and hired by the state in some manner for this task.

I certify under penalty of perjury under the laws of the state of New Hampshire that the foregoing statement is true.

Buy "Incentives and the Environment"