My RedBull Cola Stockpile Was Good While It Lasted 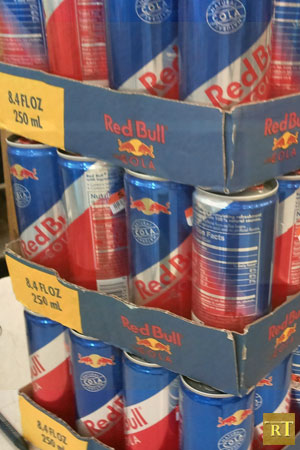 Out of any energy drink I have ever tasted, Red Bull Cola is the best. Crisp and refreshing, it is like Coca Cola, but for adults. In a short rock glass, poured over ice – Red Bull Cola smashed any amount of doubt or hesitation in the faith of one’s abilities. The world was somehow better with this fizzy nectar of power. I buy Red Bull Cola in Euros and just updated my source for you!

The design of the Redbull Cola (Buy on Amazon) can is perfect, fitting all your energy needs in an 8.4 oz package with attractive red, silver and blue label. Made from all natural ingredients (Kola Nut, Cacao, Coca Leaf, Caffeine from Coffee Beans), Red Bull Cola is a premium beverage when compared to other colas made mostly from sugar water and high-fructose corn syrup. I should say “was” a premium cola as it seems to have been discontinued for distribution in the US as of 2011.

I Bought Racks of RedBull Cola

While living in California visiting a Big Lots for a little bargain shopping, I stumbled across a large stockpile of Redbull Colas for sale. The price – a mere $.50 each. Since I didn’t drink coffee, and would usually have 1/2 an energy drink a day, or worse, a soda for my caffeine intake. I proceeded to buy 3 racks of Red Bull Cola (over 70 cans!)  for less than $35.

I would have bought more, but it would make a difficult task impossible to transport the cans of energy 5 miles on my bike in Reseda. Slowly – I got the crates of Red Bull Cola home and immediately shared with my friends. They loved them. I loved them too, so eventually, my supply started to diminish.

While I still had some cans lined reserved, I went out to resupply few weeks later. Same store, same price – so I bought another 3 racks. I should have bought every last can but I didn’t know that Red Bull discontinued their Cola offering. I just assumed I came upon a deal. That was the last time I saw Red Bull Cola for sale in a store – summer 2011.

Though I rationed them out best I could, I thoroughly enjoyed this drink almost daily. The caffeine content of each can was roughly the same as a cup of coffee. I was working on a lot of website projects at the time, and the Redbull Colas definitely gave me the wings I needed to power through the late nights in front of a computer. As  I prepared to leave California and move back home, I packed my remaining supply (about 10 cans or so) into my suitcase, hopped on a train to Denver for a week, then was on my way to Boston. A few cans amongst good friends at both stops were gifts well spent and received.

Over the years, my Red Bull Cola collection went from 5 to 3, to the two remaining cans on my bookcase. Expiration date at bottom of can reads 01/21/12, but the last one I had closing my office in 2014 was fully carbonated and extremely delicious.

Contemplating my next drink, but saving the last for my first million. Perhaps if I had saved all my Red Bull Colas, I would already have that amount.

If you remember that goodness of RedBull Simply Cola and want it back – please like/share/comment. I have been in contact with corporate and am trying to get answers as to why it was pulled in the US. #RedBullColaFans

I ordered and received fresh supplies! It’s even better than I remember:

How to Buy RedBull Cola

I found a reliable source of RedBull Cola! You should be able to get it for under $100. It is even cheaper by about 10 EUR compared to their website. Depending on the price of the Euro (Pay Pal rips like 3% off you through bad conversion rate). I buy Red Bull Cola in Euros and just updated my source for you! Sometimes it’s not available, but is in UK –

I have received several shipments from them by ordering –