I Uncovered Massive Fraud on Amazon – Here’s How It Works

I buy and sell things on Amazon. I’m an “Amazon Seller” to make a little money on the side. Lately, I’ve been buying products that, for some reason, never show up. When you make a purchase, Amazon doesn’t charge your card until your order ships, which I think is pretty smart. Most of the items sold on Amazon aren’t from Amazon, however, but from third party sellers like myself. That’s how Amazon makes so much money (not being liable for inventory).

Of those third party sellers, most sellers ship the items directly themselves. The rest use FBA (Fulfillment by Amazon), in which they ship their products into Amazon for a discounted rate, pay storage fees, and then a pick and pack fee on top of the advertising and sales fees Amazon charges. This is how I operate, though I’m getting out of this unprofitable situation.

Still, the idea of Amazon is great – I buy some things from it and usually have flawless transactions. They also create opportunity for bloggers to earn money with their affiliate program and sell products in a heavily trafficked marketplace. Unfortunately, like many publicly traded companies, have grown too large.

An unknown number of Amazon sellers have been hurt, along with Amazon losing sales, and tying up customer’s funds, effectively giving Amazon a month long, interest free loan, and the clever crooks close to risk free profit.

Here’s How It Works

A fraudulent seller puts up listings for popular products on accounts they have seeded with a couple fake transactions to give themselves positive feedback. They price these products low to get themselves at the top of the listing, and discount far enough so that other sellers can’t compete with that price without losing money. They then put the quantity up to 10-20 units. Since Amazon lets you use the stock listings with pictures, and almost every item is already listed, the fraudster never has to have physical control of the products they sell.

All the fraudulent products sell out quickly (usually a week), as they are now the lowest price on Amazon, and the internet. This garners massive search traffic for Amazon, bringing in customers that might otherwise shop on other online shopping sites or make retail store purchases. These visitors might also buy products from legitimate Amazon sellers, or Amazon Basics. Lots of money gets paid to Amazon. Business is all about touching money first and reducing liability.

Upon a purchase, the fraudulent seller gets a notification of an order, then makes a shipment with a tracking number and sends it out. When I say “makes a shipment”, it is because the item ordered is not in that shipment, and the package is not shipped to them. As stated above, when an item ships, Amazon charges the customers card and holds the funds. They release them to all sellers (good and bad) after taking fees and a few days after the shipment has arrived.

Amazon can tell when the shipment has arrived by using the tracking entered automatically. Sellers can use Amazon’s discounted printing labels to ship products, having the cost deducted from their accounts. Amazon also pays $3.99 to non-FBA sellers (ones that ship direct to customer) for shipping and handling per item. The fraudulent items are sent slow ship, media mail and ground, with wide delivery dates of 15-20 business days, which cost less than four bucks to ship. Unsuspecting customers don’t notice or accept slow shipping as a trade off for a “great deal”. That month long shipping schedule tends to make a consumer not know when to expect their item. Even with delivery notifications, it’s confusing with all the split shipments. I usually throw them in the trash, keeping only the order receipts. You know you do to, and you probably have less time to organize your email than I do.

All the Returns – Poor Amazon!

I don’t think so. Amazon is a public company in which the market currently values at almost a half-trillion dollars. Just today, they announced plans to buy Wholefoods entirely for less than 3% of AMZN’s market cap.

They have over 150,000 employees and are considered one of the greatest companies of all time. They attract top talent – computer programmers, executives and engineers – some of the brightest people in the world (and best paid). I’m unemployed, with a GED that I can’t find, and no college whatsoever, yet I have uncovered this giant, gaping hole: 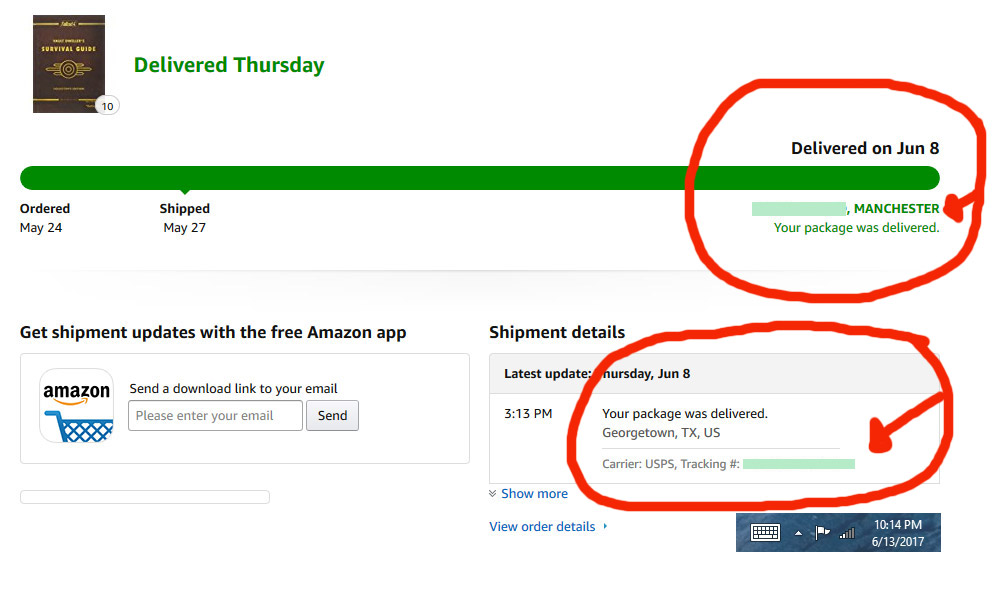 If you look closely, you’ll see that Amazon releases funds to sellers that ship to wrong addresses, and even indicated on the same display page that it arrived at the proper shipping address, while below showing the tracking arriving at a random address. Really?

It’s Ok, No Big Deal, There is Always a Refund

Sometimes there isn’t. Since at the time I discovered this it said that it already arrived, there was no option to ask for a refund, and the button to say “I didn’t receive this item” was un-clickable and shaded out. I wish I took a picture of this as they are working to improve this (cover up) as I type. 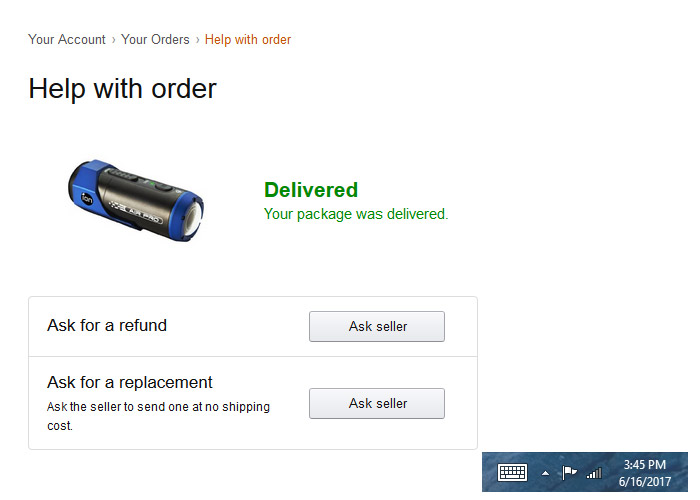 I had to search the internet to find a number to call Amazon as there is no contact page, and the help function was not helpful.

Neither was the initial lady I spoke with, and eventually got a supervisor on the phone. She opened an A-to-Z claim up for me after I explained the scam to her two times. Initially, the manager told me that I need to contact the seller first, in which I replied that I had immediately asked the seller a question after I ordered, but did not receive a response. Man, these scammers are smart.

I went on to tell the manager that I knew how this scam worked, and how to fix it, and wanted to speak to their claims or fraud department. She said there was no way to, but the end result was that she was sending a message to them at my request to have them contact me, even if by email. I told her that if I didn’t get contacted in two days, that I would be writing this story that I’m typing to you now. I also added that she should ensure that she send that message to cover her own butt, as I would for a fact be getting this out, understood her situation and powers, and did not want her to be blamed for not relaying the information.

I was not very hopeful for a response based on my past dealings with large corporations, and I was correct in my assertions.

Winners and Losers of this Fraud

There are two ways the bad guys can benefit from this fraud – they can simply take the money and run, or, even more devious, they can be fake accounts set to hurt the Amazon name/ hired by product manufacturers that do not want their products sold on Amazon. Clever.

Amazon both wins and loses with this fraud. As you can see, many customers were upset, but not necessarily at Amazon. They may have been able to recover some funds, and they may have lost access to funds that they will return to the customer, but only on items that didn’t ship. Also, many customers may not be able to file a dispute do to the inactive “shipment didn’t arrive” button described above.

Sellers are clearly losing on this deal, whether they are Amazon Sellers, or an independent store, online or not. FBA Sellers have to pay storage fees to Amazon while their item waits to sell, all sellers have holding costs to cover while their inventory sits in their warehouse or Amazon’s, and Pro Amazon Sellers like I was (just cancelled membership) don’t get full access to their benefits of a $40/month account fee. Additionally, sellers may lower their price as I did to compete, or anticipate the arrival of merchandise which never came. Any time spent making these changes or corresponding is also lost. Retailers in general lose a sale as the customer waits a month for their order to never arrive, often reordering on Amazon again.

Consumers lose as well – time, money, effort – all which Amazon touts as its competitive advantage. It took me over 30 minutes just to get the refund started, 5 emails in my inbox, and I know the system. I still have the $100 charge on my card – what happens if you are an elderly person that barely knows how the internet works?

While it’s not clear if Amazon knew about this issue and was capitalizing off of it or if they are just so cash rich that their attention was elsewhere, the results are negligent. I just proved beyond a reasonable doubt that there is a huge fraud going on, and is likely in the millions of dollars in damages.

Think Wells Fargo, Bank of America, Volkswagen, Petco, Ticketmaster, Sprint, or any of the other recent class action lawsuits that have been settled recently. Then think Robert Tanguay, and call 818-530-1984. I won’t answer, but will return legitimate voice messages. I have all the original screenshots and documents which have been covered up or will be when this story breaks.

Where Does This Leave Us?

As I’ve stated in my previous writings, Amazon is Hurting Local Communities and Retail, unfairly. This article is just concrete proof. What’s more disturbing is that this is just another example at how large corporations hurt small business and consumers, despite what all the propaganda we see in the news tells us.

I reached out to Amazon, as I have Verizon, looking for work or compensation for my suggestions, and their corporate structure is either too large, dumb or slow to respond appropriately. Maybe, they are just an evil club that plays king of the mountain. Maybe the wall of bureaucracy is too thick with professional jealousy. I reached out to the marketing manager of Solar City about my work on EmissionsTax.org with no response. Wouldn’t a tax on pollution be good for the solar industry?