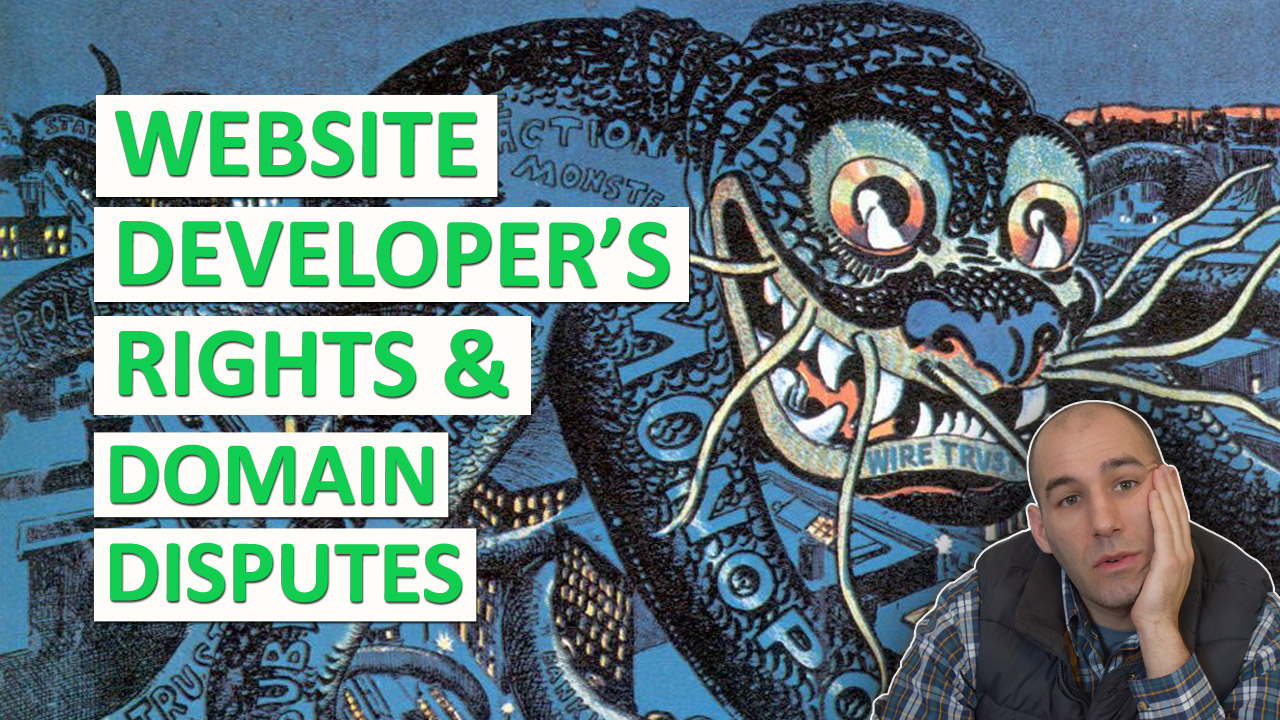 We’re going to talk about Net Neutrality, Verizon, and Internet Service Providers in general. Then we’re going to discuss how Verizon took my 7 year old website, and how it relates to Net Neutrality and monopolies. Let’s get started.

Net Neutrality in its most basic form is treating all internet traffic equally. Protections were written into law under the Obama administration in 2015 prohibiting internet service providers (ISPs) from slowing down, speeding up, or restricting access to legal internet traffic.

The law was designed to protect consumers like you and I from being throttled from competing services such as Vonage VOIP phones, Netflix and other media providers.

About a month ago (December 14th, 2017, right before Christmas), the FCC voted to repeal these vital protections, led by former Verizon legal head and current FCC Chairman, Ajit Pai.

Chairman Pai defended eliminating Net Neutrality by stating that the current regulations stifled innovation and investment, which is complete BS. I’ll explain why in a short bit. But first…

Verizon, Comcast, most internet service providers and proponents of repealing Net Neutrality argued that the regulations prevented ISPs from investing in infrastructure and they stifle business.

I really couldn’t find any other reasons – please let me know if you do. There was no public hearing prior to the vote, only a lame video mocking assuring us that we can still buy fidget spinners and post on established, multi-billion dollar social media networks like Instagram.

I can tell you why they want to repeal Net Neutrality – Profits. Over the last decade, Internet Service, Cable and Content providers have greatly consolidated into regional and nationwide monopolies.

In 2017, there were about 126 million homes in the United States. Almost half, or 50 million of those households, had only one internet provider to choose from for speeds of 25MB/sec or none at all.

In 2016, Verizon bought Yahoo, acquiring the user data for hundreds of millions of email accounts. In 2013, Comcast finished acquiring all of Universal Studios content – the movies, music, shows, everything. They own most of America’s music and film history.

What kept these communication companies up at night, all of which are ISP’s, is another Netflix. Net Neutrality allowed new companies to compete in a quasi-fair marketplace with new information, shopping and entertainment services.

They can rest easy now that repeal of Net Neutrality has passed. In fact, today, January 18th 2018 – congress just voted to pass continuation of NSA spying permissions. Do you see any connection?

It’s like they are all working together to control media and communication of every citizen….

Let’s say you bought a piece of land from a licensed Real Estate agent, and then built a building upon that land and used it for two years. Then a worldwide corporation sends you an email saying that it is their land and demands you give them that land, would you?

What if you said no, and then they disappeared, so you continued to improve the land, planting fruit trees, wells and roadway, advertising your farm at great expense. For four more years you worked and toiled until you were contacted by an email again from an agency in Europe telling you that a hearing had been initiated to take your land. Can’t be legal right? You have a duty to protect your property, recognized by “Squatters Rights” and statutes of limitations in the courts.

In an essence, that’s what happened to me.

In 2009, I bought domain FiosFinder.com. Then, a good friend of mine and I built a website on that domain. Using another programming friend, we showed the availability of Fios service live on the site. Two years later in 2011, Verizon contacted me saying that “Fios” was their trademark, and I needed to hand over the FiosFinder.com domain.

I responded immediately that I disagreed, my justifications for my ownership, and offered to work with them.

Verizon said they would pursue legal action, and that was it. I didn’t hear from Verizon for another 4 years, until the end of 2015.

During that 4 year stretch, the team and I put in considerable work, building up FiosFinder, hundreds of links manually on Yahoo and the sites I owned or managed. I also paid thousands of dollars out to the partners for their work on FiosFinder.

Verizon didn’t want to hear anything about that. Though the statute of limitations of 2 years for a tort were able to pass, Verizon paid for a mediator in a closed door, corrupt process to take the domain from me without court order with WIPO and GoDaddy.

I was able to stop it several times, but then they hired an outside lawyer who threatened to sue me personally and the partners for willful engagement of $100,000 each.

While I knew I was right, money was tight, I had a baby on the way, the partners wanted nothing to do with it, nor did my family. At the last minute, I got a very lucrative job offer and was scared that this event would prevent me from providing for my family, or even myself.

I stopped fighting, and they were able to get the domain. I asked for some compensation for years of hard work, but none was given.

See, Verizon, or any publicly traded company, always claim to want to innovate, but that is actually the opposite of the goals of corporations. Corporations are designed to either make profits or protects assets.

Innovation is competition, and competition is expensive. Costs reduce profits. There are extreme incentives for companies to either break or make laws rather than innovate. Further, established companies have all the capital, money and resources that small companies don’t.

Monopolies naturally form, which is why regulation is so important. Sometimes more is needed. Capitalism is good, but we needed an amendment to our Constitution to stop slavery. Capitalism is profit over efficiency.

Instead of Verizon innovating and coming up with FiosFinder, or even just paying a strategist to buy those domains, they elected the bully route.

In fact, Patrick Flaherty, the same person that contacted me in 2011 was the person filing the WIPO claims to take FiosFinder.com in 2015.

Profiting From the Government (Rent Seeking)

This how the story of FiosFinder relates to Net Neutrality and government regulation.

According to Patrick Flaharty’s LinkedIn profile, he started lobbying ICANN on behalf of Verizon in 2014 to present. ICANN sets the policy for domain disputes. WIPO mediates. So he contacted me in 2011, did nothing, then lobbies ICANN for over a year, then hustles through a back door domain seizure. Hmmm…

If you go back further, looking at Patrick’s education, you’ll see that from 1996 to 2000 he studied Irish language and corporate law at the National University of Ireland in Galloway. Then, in 2003 while working for Verizon, he went to Graduate School stateside as George Washington University School of Law in our nation’s capital to study Intellectual Property.

Have you heard of the “Double Irish with a Dutch Sandwich”?

It’s a tax strategy completely legal in which muti-national corporations funnel profits to subsidiaries in low corporate tax countries such as Ireland and Holland to avoid paying taxes in the US.

Now, this is just an assumption, but it seems to me that this just shows you how our economic and legal system works. Patrick Flaherty has essentially been groomed for large corporate interests, and those interests hurt consumers and the future opportunities of all Americans.

Comcast, Verizon and the other ISPs claim that Net Neutrality stifles investment and innovation.

I just explained how rather than provide information on Fios availability or higher someone to create that content, Verizon shut down a functioning, well used website promoting their services and availability. They don’t want to compete.

When Verizon took my domain that I curated for 7 years, they confiscated all the links that I have built to FiosFinder.com on my sites and others under the pretense that I was FiosFinder’s owner. They did this without compensating me for those links, and for the cost I incurred to change those links, plus damage for broken links affecting my search engine standing.

This is a tort. If I were to sue and win for damages and it were connected to Net Neutrality, well, Congress might act to reverse the vote or restore Net Neutrality.

How Can We Do This?

If you share this video, like it and comment on it, it will generate a buzz and give me the feedback needed to launch a Kickstarter.

UPDATE: NO ONE CARES

That Kickstarter will fund the filing and legal counsel to sue Verizon. A video explaining the case in greater detail will be up soon. Time is short.

I think I was wronged by Verizon and our country is being wronged by losing Net Neutrality protections. I also think that my case is clear cut proof that Verizon and other ISPs are not hindered by consumer protections, but their lack of innovation, so, they shut down their competition in unlawful ways.

What do you think? Am I right? Am I wrong? Did I miss anything? I need to know what the general public thinks. I look forward to hearing from all of you.

I’m Robert Tanguay and thanks again for your support. Subscribe to my YouTube for progress on my work and more thought provoking content. Hit me on Twitter – I respond ( even to Trolls as I am one).

Like this article and my fight for justice? Read about the massive fraud I documented on Amazon