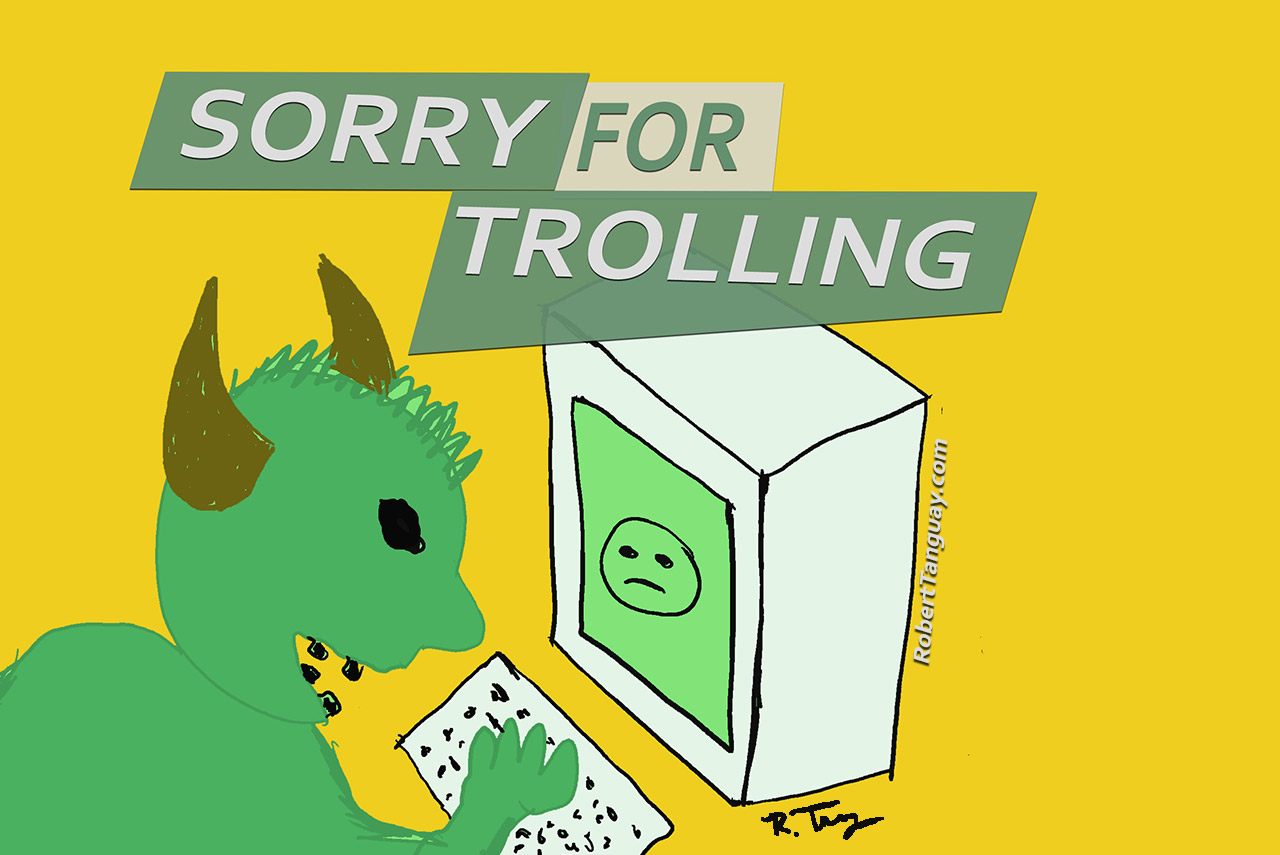 I am sorry for trolling all these years and even currently now.

I’ve been trying not to as of late, mostly because the return on the investment of time needed to troll has been rapidly declining over the last decade, as big tech (social media and Microsoft mostly) consolidates the distribution of information and ultimately, thought itself.

You see, I grew up fatherless and poor, an only child of a woman who works too hard and is taken advantage of consistently. I am still not able to protect her.

I can remember the time, several years ago, crying in my car after talking to my mother about her most recent alcoholic, abusive husband. She became homeless, not because of her own doing per say, but because of her husbands in-ability to work. Luckily a church provided a place for them to stay while her now ex-husband got back on her feet.

“I’m sick of this $*%#” I said driving my car to pick up my son from daycare. I could no longer lie. So many societal problems have chewed this woman apart. Chewed me apart.

Around that time, I wrote a book that only a handful of people have read called “Incentives and the Environment”. I created EmissionsTax which a lot more people have seen and read.

I expected the world to embrace such a revolutionary plan. I thought they would be amazed by my work.

I still believe that Lowering Income Taxes, Pricing Pollution and Funding Liabilities like Social Security and Medicare is the right solution to stop climate change and societal inequities.

But I have to accept that there are massive interests in the current world’s operation. I even appreciate as I published before, in my book and writings, that I enjoy the comforts and and safeties of modern society.

It ain’t that bad, but it’s far from perfect.

Let’s get back to why I trolled for so long.

Girls used to post stupid sayings under fake names with revealing pics. Beautiful women, insecure women, getting the approval they need. Myspace was new back then – the first major social media network.

Girl I’d Do ANYTHING FOR YOU

You wouldn’t believe the positive response rate. Some might describe this as trolling.

I would like to refine the first definition of trolling from:

“make a deliberately offensive or provocative online post with the aim of upsetting someone or eliciting an angry response from them.”

I had started my satellite TV installation company, SatHookup, in 2005. A few good years then the 2008 financial crisis hit.

I lost my drivers license. They took my car. I got a bike. I moved next to the courthouse. I started writing on the internet and paying attention to politics. The news….. at least on the internet.

I would also watch documentaries on all types of different issues in society. I read books. It was a lonely time.

I learned a lot of new information on how the systems of government work, game theory, economics and power. I was studying society to make the world a better place – more equitable for people like myself.

I’ve always had some sort of an understanding of the corruption and injustice from my background and how far I had come from where I started.

When I would see an article spouting absolute non-sense, I couldn’t help but post a comment, maybe with a link to my article.

I would get tons of likes, tons of traffic, so I started doing a regimented routine of looking at the news, commenting, or “trolling” the weak articles used to scare or manipulate public opinion for financial gain.

At that point, I thought it would make a difference. It did, in a way, by helping me perfect my argument. I was in my mid 20’s at that point, learning about different things.

Regardless, I was making money off of a few of my websites. It was good money actually. Still had issues with my drivers license, and living in Los Angeles at the time, it was hard to get around such a large, sprawling city.

Where is the Opportunity Now?

Can you knock on any doors anymore? Cold calling via telephone is not as effective as it used to be.

Write a good article or make a thought provoking YouTube Video – it gets buried in the algorithm. You have to pay to play.

This means that you have to spend money to get heard or find a profitable way to get your thoughts out. That’s why most content we see is attached to a special interest or business.

Love for a Troll?

How do you meet a romantic interest? Tinder? Bars, music halls, even churches are closed now. Schools aren’t in session. Group gatherings are done.

There were no fireworks this year for us. If you are wealthy and perhaps have a lake house you could have some fun Summer 2020. With social media, you can broadcast your wealth to gain companionship.

With Corona virus, whether over hyped or not, there are far fewer opportunities available.

Practically every single one left you first go through an electronic system, big tech, in which the user agreement allows them to own that communication, replicate, sell your data (all of it) or train their AI.

The End of Discussion and Debate

No town halls, no public meetings or political rallies. Any time you ask a question or place a statement, it is quickly forgotten. People are in their own little short, curated worlds now.

Unless you are part of the 1% richest people that have seen thier we all have to work harder to have a home, raise a family and gain power in this world.

People tend to justify their position, including myself. There are too many interests that compete with freedom. Upward mobility is near nothing. Generations of haves and have-nots.

I know their is good in this world. People are good. It’s the systems that are bad.

So I am going to take my energy and instead of trolling, perfect my work. I am going to reach out to people in the real world. Show them what is happening.

I may be wrong, but by “trolling” I will never find out.

Thank you for reading. I’m grateful for the opportunity to be heard.

I am a sales and marketing professional with skills ready to deploy.