“Incentives and the Environment” Book Release 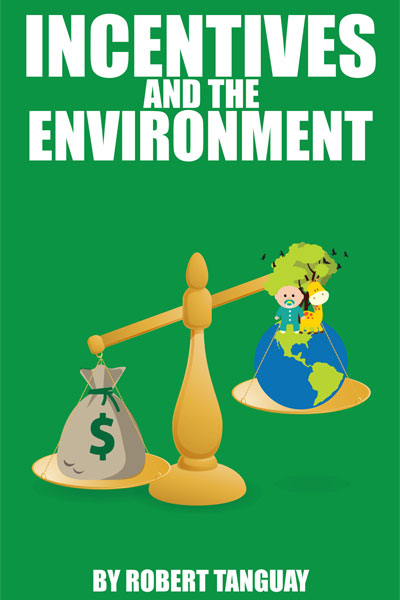 Buy “Incentives and the Environment” on Amazon

The environment is a topic I think about daily – through my work, trips outdoors, planning for the future of my family. For me to be happy, I need a job doing something that I’m passionate about. Employment is mostly working at the same objective for long periods of time. Life is short. I want to make my time count. I had to get creative to show my commitment, so I founded an organization called “Emissions Tax” after being the first to coin the hashtag #EmissionsTax. The only meaningful way to protect the environment is by pricing pollution.

I’m very proud of the book I wrote and self-published, “Incentives and the Environment”, available on Amazon now. I’m officially an author.

The goal of this writing is to educate policy makers and the general public how incentives interact with our environment. Currently, this is more incentive to pollute than not. People and businesses are influenced primarily by their incentives. My hopes are that by writing “Incentives and the Environment”, it will either get picked up by a publisher, garner attention to the need for an Emissions Tax, or at the least, get an opportunity to work in a field I am passionate about and can make the greatest impact in.

I’ve begin working on hard copies, and am contemplating doing a Kickstarter campaign to raise the funding needed to make a local distribution financially feasible. To get the word out, I’ve been releasing the book in a special web series on EmissionsTax.org, a project I founded a little over a year ago. When all is set, I’ll run an online marketing campaign.

Video Promo for Incentives and the Environment

Here’s a press release I whipped up that fit on one page:

We are trying to protect the environment the wrong way

Book by New Hampshire author, “Incentives and the Environment” explains why.

Manchester, NH June 6, 2017– Founder of EmissionsTax.org and local entrepreneur, Robert Tanguay’s new book discusses what he says has been lacking from the discussion on climate change and global warming – incentives. It is being released in parts for free online starting Sunday, May 7th.

“It’s going to be a hot summer, even in little old New Hampshire. The need to take meaningful action is imperative. We need to get this out to as many people as possible, so I will be putting my work on the EmissionsTax.org site to garner attention for the greatest issue of the 21st century.” , says Tanguay.

EmissionsTax is an organization Tanguay started after losing his job in September of 2016. He wrote “Incentives and the Environment” to show his depth of understanding and qualifications as a leader in the renewables industry. He is looking for an opportunity to affect environmental policy directly and through educating the public on the economic side of environmental issues.

“If the coal and oil companies hire lobbyists to promote their interests at the detriment of the future, the renewables and green tech industries should be doing the same.”

“Incentives and the Environment” is available in eBook format now, with plans to print physical copies over the next few months.

So That’s How You Do It

Yes, it can be done better, but this is the “Home Brew” “Guerilla” style. This press release gets the message across, is easy to send, and looks reasonably professional. I’m still working on the video, and will write an article about that process in the future, but the one above is good to go. I could spend more time on it and come up with something of higher quality, even more so for clients with budget.

As for the written press release, I’ve only sent out a few and haven’t received much response. I guess the true power comes into who you have for media contacts and the relationship you’ve built with them. I’ve been in a newspaper using a similar technique.

I’d love some press coverage for “Incentives and the Environment”. I’m available for meeting, interview, partnership and can be a guest on your blog, podcast, radio or tv show. You can reach me here.

What’s worked for you? Any thoughts? Leave them in the comments bellow.