Can Our News Be Bought? CBS Possibly… 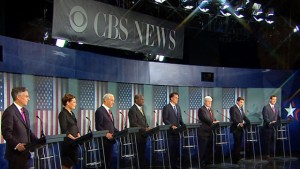 The internet is abuzz with talk of CBS cutting Ron Paul’s time from the Presidential Debate held today in Spartanburg, SC.

Initial reports are clocking Ron Paul’s total on air time to 90 seconds. Coverage of Paul on CBS’s official site is zero, except for a screen shot used for a video thumbnail in which Paul is only featured silent between two candidates.

The 2012 Election Debates appear to be little more than advertisements for major corporations, lobbyists and such. It is becoming more apparent each day. You may find better journalism here on my personal site. 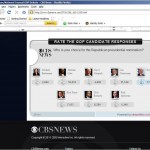 Virtually all internet polls show Paul leading all other GOP candidates, which leaves one question, why is Ron Paul not getting more media coverage?

At the time of this article’s publication, the poll as in the screen shot on the right is currently unavailable on CBS and both OlivePolitic‘s website and Facebook page. It has been advertised as a “live” poll, presumably to instill authenticity. Is it being doctored or in any way modified to reflect results favorable to the sponsors of the debate?

What is more alarming is the fact of CBS’s demographic. Being a over the air broadcast station and free for anyone to view, many of it’s viewers have no other source for news; low income families and the elderly without internet access.

This is just another documented instance of news media favoring and sometimes completely excluding specific candidates with views out of alignment of a particular news platform. See bellow for a recent documentation of Yahoo! News failing to mention Ron Paul in a review of GOP candidates around the time of the Iowa Straw Poll early August, 2011.