What’s hyped up, made of nothing and depreciates faster than a new car? 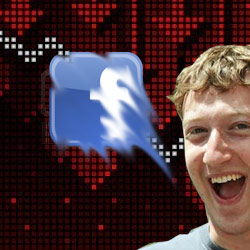 With initial asking price of $38 on Friday the 18th of May , Facebook’s IPO share price has dropped almost 15% at the time of this writing (mid-day Tuesday May 22nd). Why?

I’ll try to keep it simple. Several factors come into play when dealing with any stock price, especially an IPO. One is the value of the company – and Facebook is huge , claiming over 1 Bil users worldwide. But that’s not important, what really matters is revenue and GROWTH.  Facebook gets most of it’s from ads, and about 15% from Zynga and other games – all on the decline. User interaction, acquisition and satisfaction are also flat or in decline. There is no growth to be had.

Facebook claims it will put more ads up,which I laugh at. My news feed is an ad, from “I’m successful”, “I need help” “I’m single”, “Read my Article” (me), “Click this Link” to “Buy me Birthday/Baby presents”. Facebook is no longer cool. How are you going to stack ads on top of ads?

So let’s get back to why Facebook’s IPO will fail, not for Facebook, but for all of you “learned” investors. See, nobody talks about the fact that Mark Zuckerburg, Eduardo Saverin, Dustin Moskovitz, Chris Hughes, the mural guy, and countless others are sitting on over a billion shares of stock, for which they can’t sell because of a stock lock up that will last between 90-180 days. They will then take their debted paper shares (Yahoo lawsuits, overhead, employees) and unload them into the market. This will be known as the Facebook IPO Scam.

Too bad Myspace didn’t think of this.

Mark Zuckerberg sells 41 million of his shares – source: Yahoo News (They have removed this article)