Money in Politics | Media and Politics – Is it Bad? 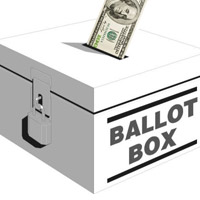 Money in Politics – we can’t seem to get away from it. It wins elections by funding attack campaigns, gains exposure with media coverage and advertisements, and people making money together always seem to endorse each other.

What you may not realized is that the game is rigged. Let me explain how.

All media companies can be easily summed up by it’s expenses:

Distribution: Broadcast, DVDs, Shipping, Commissions, Web servers – anything that gets content to viewers

Isn’t it ironic that in the pursuit of democracy, we vote for candidates that will most benefit our interests, however historically and as of the recent New Hampshire primary, we elect the ones that spend the most money. Money donated to them by those that benefit from the current system, the ones with disposable income looking for tax breaks.

The whole idea of elections are to ensure that no particular person, group or entity gets too much power. You know, shake it up a little bit. It is impossible to ever have a fair election when you add money to the equation. The outcome will  end up the same way, people in power stay in power. American elections exist only to validate those in power and their right to “rule”. This is a democracy, you know.

But wait, what if the current elite saw the loss of productivity caused by voter disenfranchisement and realized that the old tricks won’t work anymore. People get their information freely from the internet, validated by millions of comments from other internet users and social networkers. They might consider providing an open platform to discuss the real issues, and elect leaders that take us back to our nation’s roots  of independent, small businesses and self sufficient families – what made America great in the first place.

Enter SOPA and countless other “Internet Policing” laws getting forced down our throats like medicine to a test patient. Don’t worry – it’s good for us, plus, we get paid in the form of benefits (unemployment, welfare, police). All we have to do is let our Corporation run government control the distribution of ALL our news and media – but that is another article in itself..