I Want a Republic for Christmas

“I pledge allegiance to the flag of the United States of America, and to the republic for which it stands, one nation under God, indivisible, with liberty and justice for all.”

We have all recited this pledge as youths in school; our hands across our chests, ready to start the day as students of 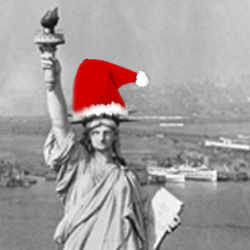 good. These words stick with us throughout our lives. You most likely would be called un-American to argue otherwise. Why is it then that most of us don’t really know what a republic is?

A Republic is a government of sovereign rule, meaning one of individual rights and freedoms. In America, these freedoms are guaranteed by the Constitution and Bill of Rights. By becoming a citizen, you and the government agree that you will abide by those writings. This forms a contract. For the contract to be valid, consideration must be met.  You pay taxes and refrain from violating others rights, and the government provides services such as military protection and roads with the tax dollars you pay with regard to your rights.

A Democracy is one of the oldest surviving forms of government.  It is one in which the majority rules. That means, in a pure sense, a room with 51 orange people and 49 blue people with only enough oxygen for 50 people to survive with, the 51 orange people could vote the blue people out, and most certainly would following the laws of self interest. It is bad to be a minority in a democracy – they always loose to some extent.

The Laws of Self Interest are something I just made up, or at least the cool title, though they have always existed. It is why you or I won’t go to work for free, or on a positive note, why you WILL share this article with your friends and family upon understanding all of the benefits of a Republic. Everyone acts in their own self interest, and instead of fighting this natural motivation, our forefathers have combined the lessons of eons of failed governmental rule into the nice documents that we now teach in history classes across America.

Why I Want a Republic for Christmas

First of all, it was promised to both you and I, not just in school, but by everyone of our classmates, teachers, leaders, friends parents, celebrities and our pop culture icons. I also made a promise. It was, however, conditional, that it remains a republic, with liberty and justice for all. As anyone with an internet connection can see, this is frequently not the case.

A Republic is the only form of government that eradicates disenfranchisement. The world is bountiful and science is the only true law, as all laws made by man are little more than matter of opinion (These are my words, so you can quote me). By protecting individual’s sovereignty, you grant them the freedom of experimentation, finding their own way in life most efficiently suited to them. It allows a person the right to defend themselves while choosing which mutually beneficial relationships they wish to partake.

I know a bad deal when I see one; most people do. The bailout of thieving banks that liquidated massive amounts of US capital (future earnings in the form future tax revenue) and moved off the global market and into their private coffers or to sweep up worldwide assets at deep discount. NSA tracking every US communication point, collecting that data, processing and analyzing it secretly for our benefit? No thank you Secret Santa. How about a little health care bill that forces nearly every citizen to buy a private product from an industry closely related to banking and riddled with consumer complaints before it was mandatory you purchase insurance from them.

I am simply tired of a consistent barrage of law after law after “beneficial” law imposed like clockwork, pushing hope of advancement of society further away. Bills proposed that I don’t want to pay for, subsidies and favors to monopolies and industries that neither you or I will ever be able to get a foothold in nor profit from. All I see are chain links being constructed, meant for our necks. It must stop.

How We Can Get a Republic

By now you are probably wondering what can be done about this. Well, I can say I have tried. I know I will not get a republic this Christmas or even the next. So, after much thought and reflection I have decided to write this article to inform my friends and theirs that we have been lied to our whole lives. If you are reading this, I’m assuming that you don’t believe in a guy in a red suit holding list of who is naughty or nice, with your future prosperity in his hands alone. If you were poor growing up, you learned quick that Santa didn’t exist or you would suffer from serious emotional problems due to lack of gifts received. Why is it that you still believe in a magical figure in government that will make all the worlds problems go away?

Not all politicians are bad, and I’m sure even Hitler had a self justified soft spot for non-Jewish kids, but we must all understand that no other person on this Earth will care about you and your prosperity more than yourself. When you understand that simple fact, you will see the beauty in a Republic and why those rights must be protected to allow for liberty and justice for all.

Merry Christmas to all!

I pledge allegiance, to this tax farm, for which upon I was born, in servitude and without regard, one prisoner under a facade, with liberty and justice for neither me or you.